Petronėlė Gerlikienė entered Lithuanian art at quite a venerable age. Her appearance in the world of art was rather unexpected, and the stay – brief. Nevertheless, she left a small but exceptionally authentic creative heritage. The spontaneous artistic power that manifested itself in the last years of her life and eventually transformed into an individual world of poetic visions was a gift of destiny for her as well as all of us. The archaic firmness of her work and the serene assuredness of her single truth, revealed a personality of a rare unanimity that, regardless of any hindrances from the side, managed to let the clear and spiritualized image of life’s wholeness break through the commonplace. The themes of Gerlikienė’s tapestries and paintings appear basic and simple; however through the self-evident there emerges the outline of an extremely individual and imaginative world. It is real poetry, the essence of which is beyond the exactness of words. When looking at Gerlikienė’s works one unconsciously remembers S. Riauba, S. Šepka, and those nameless talents of former epochs able to look through the surface of reality into its very depth with ingenuous wisdom.

In Gerlikienė’s works everything around and within us unites in one indissoluble layer. Nothing is separate in the bright light of her visions – trees and birds have human eyes, nature as well as humans lives and dies only temporarily, and the moment of time quietly recedes into infinity. The artist’s extraordinary vitality is expressed in a free, expressive, and perfect way. There are neither coincidences nor unimportant details in Gerlikienė’s works. The painter’s artistic flair, free of the meticulous need of perfection and the great deceit of trying-to-make-it-look-like-it’s-real, provided her with the elemental strength, and the freedom of colour and drawing controlled by a sensual impulse. The latter qualities distinguished Petronėlė Gerlikienė’s work from the common specimens of modern folk painting.

Petronėlė Gerlikienė’s impulsive nature manifested itself most vigorously in her paintings in 1977-78 when her works became marked by shadows of apprehension. The celebration of life pulsating from her early works that had fascinated with its effervescent energy, omnipresent flourishing and abundance (“A ship”, “A rowan”, “An oak tree”), now became filled with intense but extremely powerfully expressed tragedy and frightening omens whose unseeing eyes were full of sorrow (“A Mother”, “The Sorrowful One”, “Looking at the Sun”).

The world that Petronėlė Gerlikienė saw in her visions will not be added to or continued, but its strength of emotion and inner freedom – the core of true creativity – will never cease to appeal to us. 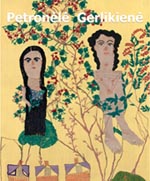